During my residency training and for parts of my career, I practiced in several "safety net" clinics, defined as clinics that serve a patient population where at least 25% have no health insurance or are insured with Medicaid. As family physicians who work in these settings well know, resources are often limited, and arranging for patients to receive necessary care at an affordable price can be a major challenge.

While on telephone hold one day for the umpteenth prior authorization request for a medication my patient had been taking for years, I remember consoling myself that at least these maddening financial constraints provided protection against low-value care. Unlike the concierge practice on the other side of town, I couldn't get patients with acute low back pain into a magnetic resonance imaging (MRI) scanner the next day or order huge panels of unnecessary laboratory tests at health maintenance exams.

As it turned out, my perception was more myth than reality. In a recent cross-sectional analysis of national survey data on nearly 200,000 office visits from 2005 to 2013, Dr. Michael Barnett and colleagues examined performance on quality measures for low- and high-value care among uninsured patients, patients with Medicaid, and privately insured patients. Sample low-value care measures included computed tomography (CT) for sinusitis, screening electrocardiogram during a general medical examination, and CT or MRI for headache. High-value care measures included aspirin, statin, and beta-blocker use in patients with coronary artery disease and tobacco cessation and weight reduction counseling in eligible patients. The authors analyzed the data by insurance type and by physicians classified as practicing in a safety net population. They found no consistent relationship between insurance status and quality measures, and they concluded that safety net physicians were just as likely as other physicians to provide low-value services.

This study's findings underline the importance of involving clinicians and patients in underserved practices in the Choosing Wisely campaign against medical overuse. For example, the Connecticut Choosing Wisely Collaborative used a foundation grant to study patient-clinician communication about care experiences and incorporate the Choosing Wisely "5 Questions" at two federally qualified health centers. Lessons learned from these pilot projects included providing patients with context for the "5 Questions" materials and offering ongoing role-specific training and support for everyone on the care team. 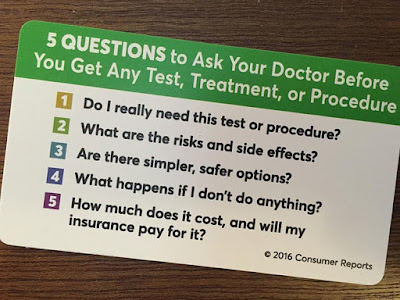 This post first appeared on the AFP Community Blog.
Posted by kennylin at 6:58 AM

The USPSTF takes a step backward on PSA screening

I don't agree with all of the statistics cited in this infographic, particularly the optimistic estimate that 1-2 men out of every 1000 screened with the PSA test avoid death from prostate cancer. I believe that the USPSTF's 2012 estimate of 0-1 men remains more accurate, but even if the new figure is true, I don't think that changing the PSA recommendation from a "D" (benefits no greater than harms, don't do) to a "C" (small net benefit, do selectively) is warranted, given the collateral damage to men's health that screening produces. In an editorial in JAMA, the USPSTF Chair and Vice-Chairs have invited the public to comment on the draft recommendations, which are more consistent with those from the American Cancer Society and American Urological Association than the American Academy of Family Physicians and the American College of Preventive Medicine (which both recommend against PSA-based screening). They will hear from me, and I hope that they will hear from others in primary care about the physical, psychological, and opportunity costs of taking a step backward on PSA screening.

Although I rarely initiate opioid therapy, my practice has inherited an increasing number of patients for whom previous physicians have prescribed potentially dangerous doses of opioids for chronic musculoskeletal or neuropathic pain. What is the best approach to take to this situation? As Dr. Jennifer Middleton discussed in an earlier American Family Physician blog post, I could follow the Centers for Disease Control and Prevention guideline and try to reduce their pain prescriptions to safer levels by substituting alternative treatments, such as cognitive behavioral and physical therapy. I could choose to stop prescribing opioids for chronic pain, as one federally qualified health center did with notable success. I could also seek out additional training to become certified to treat opioid addiction with buprenorphine.

Last year, Surgeon General Vivek Murthy called on every physician in the U.S. to pledge to work with him to "turn the tide" on the opioid epidemic. Writing in New York Magazine, columnist Andrew Sullivan recently called it "this generation's AIDS crisis" - an epidemic that, by being highly concentrated in one demographic (AIDS in urban gay men, opioids in rural, white working-class persons), was invisible to most Americans:

For many of us, ... it’s quite possible to live our daily lives and have no connection to this devastation. And yet its ever-increasing scope, as you travel a few hours into rural America, is jaw-dropping: 52,000 people died of drug overdoses in 2015. That’s more deaths than the peak year for AIDS, which was 51,000 in 1995, before it fell in the next two years. The bulk of today’s human toll is related to opioid, heroin, and fentanyl abuse. And unlike AIDS in 1995, there’s no reason to think the worst is now over.

The April 1 issue of AFP featured a Practice Guidelines summary of the American Academy of Family Physicians' position paper on management of chronic pain and opioid misuse, which noted that "in addition to physicians, there are opportunities to help at the practice, community, education, and advocacy levels." In an accompanying editorial, two family physician authors of the position paper argued that family physicians should take a leading role in responding to the opioid crisis:

Family physicians are committed to advancing population and community health, and we must take the lead in reducing opioid misuse and overdose before outside entities mandate practice strategies that may not be patient-centered. Substance abuse disorders remain a stigma, and physician offices must be safe places for nonjudgmental diagnosis and treatment. Although we certainly cannot tackle this challenge alone, we have a clear opportunity to combat the problem of opioid misuse.

Similarly, the American College of Physicians recently published a position paper on prevention and treatment of substance use disorders that observed that only 18% of people in the U.S. with a substance use disorder are receiving treatment, far short of treatment rates for other chronic conditions in primary care: hypertension (77%), diabetes (73%), or major depression (71%). The authors concurred with the AAFP that multi-pronged efforts will be required to reduce the rising toll of opioid misuse:

Multiple stakeholders should cooperate to address the epidemic of prescription drug misuse, including the following strategies: implementation of evidence-based guidelines for pain management; expansion of access to naloxone to opioid users, law enforcement, and emergency medical personnel; expansion of access to medication-assisted treatment of opioid use disorders; improved training in the treatment of substance use disorders, including buprenorphine-based treatment; establishment of a national prescription drug monitoring program (PDMP); and improvement of existing monitoring programs.

This post originally appeared on the AFP Community Blog.
Posted by kennylin at 2:37 PM