Actual causes of death in the U.S.: not what you think

Any standard public health or medical school prevention text includes (or ought to include) some version of the figure below, which illustrates that the leading causes of death in the U.S. at the turn of the century (heart disease, cancer, stroke) were actually surrogates for what have come to be known as the actual causes of death: unhealthy behaviors such as tobacco use, poor diet, and physical inactivity. 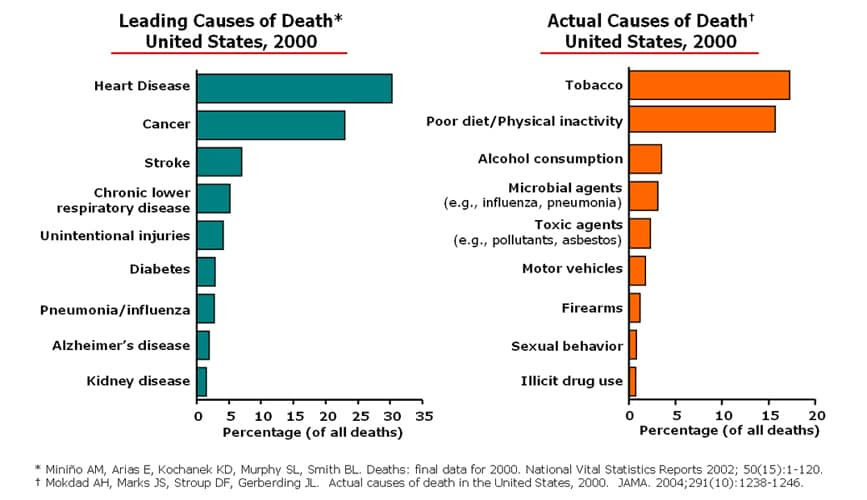 The most effective preventive services that primary care clinicians provide, then, are not screening tests but counseling interventions that aim to change one or more of these behaviors for the better. Community-level initiatives such as tobacco-free restaurants and campuses, pedestrian-friendly cities, and increasing access to nutritious food sources play a critical role in changing health-related behaviors, too.

Unfortunately, the impact of behavioral or "lifestyle" approaches to prevention is likely to be limited by two factors: 1) even intensive interventions produce very modest benefits; and 2) behaviors don't exist in a vacuum, but are largely shaped by economic and social circumstances. Family medicine professor and former U.S. Preventive Services Task Force member Steven Woolf has published a number of studies showing that the risk of death is strongly associated with levels of college education and income; his research team at Virginia Commonwealth University worked with the Robert Wood Johnson Foundation to develop an interactive County Health Calculator that illustrates how many premature deaths could be avoided by eliminating educational and income disparities.

Researchers from Columbia University went a step further by publishing "Estimated Deaths Attributable to Social Factors in the United States" in this month's issue of the American Journal of Public Health. Using estimates derived from the literature on social determinants of health and year 2000 mortality data, they found that the "actual" causes of death looked like this:

Clearly, we know a great deal more about successful strategies for fighting clinical and behavioral causes of death than we do about social causes, some of which often appear intractable. But I could not agree more with the authors' conclusion that "these findings argue for a broader public health conceptualization of the causes of mortality and an expansive policy approach that considers how social factors can be addressed to improve the health of populations." The point being: poverty, discrimination, and low education aren't just social or political issues best left to non-clinicians - they're health issues, too.
Posted by kennylin at 12:25 PM