Book Review: "Your Medical Mind" and the challenge of shared decision-making 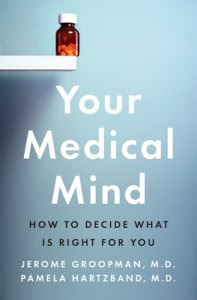 Recently, I had a conversation with Shannon Brownlee (the widely respected science journalist and acting director of the Health Policy Program at the New America Foundation) about whether men should continue to have access to the PSA test for prostate cancer screening, despite the overwhelming evidence that it extends few, if any, lives and harms many more men than it benefits. She felt that if patients could be provided with truly unbiased information and appropriate decision aids, they should still be able to choose to have the test (and have it covered by medical insurance). Believing that one of the most important roles of doctors is to prevent patients from making bad decisions, I disagreed.
After reading Your Medical Mind, the new book by Harvard oncologist and New Yorker columnist Jerome Groopman, I think he would probably side with Brownlee's point of view. Groopman, whose authoring credits include the 2007 bestseller How Doctors Think, and wife Pamela Hartzband, MD have written a kind of sequel to that book that could have easily been titled How Patients Think. Drawing on interviews with dozens of patients about a wide variety of medical decisions - from starting a cholesterol-lowering drug, to having knee surgery, to accepting or refusing heroic end-of-life interventions - the authors explore many of the factors that influence people's health-related choices. The result is a compelling narrative that seamlessly blends "rational" factors such as interpreting medical statistics and decision analysis with personal factors such as past experience, emotional states, and personality styles.
Some of the ground in the first few chapters ("Where Am I In the Numbers?" and "Believers and Doubters") has been well-covered in other recent books, notably, in H. Gilbert Welch's Overdiagnosed and Know Your Chances. But Groopman and Hartzband go farther in challenging two notions that have strong advocates among current U.S. health reformers: 1) adherence to evidence-based guidelines is a panacea for improving care outcomes; and 2) preparing meticulous "advanced directives" will simplify and improve end-of-life decisions. The authors also observe that shared decision-making means just that: a shared decision by a doctor and patient on a level at which a patient feels comfortable, not the one-sided ritual of "obtaining consent" or complete abdication of responsibility by the doctor.
"If medicine were an exact science, like mathematics," Groopman and Hartzman conclude, "there would be one answer for each problem. Your preferences about treatment would be irrelevant to what is 'right.' But medicine is an uncertain science. ... The path to maintaining or regaining health is not the same for everyone." Even to a physician who spent several years of my career working on prevention guidelines and remains an unabashed supporter of guideline-driven care, these words ring absolutely true.
In practice, of course, patients make a lot of seemingly irrational decisions. A healthy 40 year-old male patient may, if he wants, request annual PSA tests and decline the HPV and influenza vaccines for his children. These are poor choices which some doctors would even take personally. As his doctor, and a believer in the mantra of shared decision-making, I would do my best to make sure that he understood the relevant statistics, and elicit any past experiences or personal beliefs that prevented him from considering my recommendations. But if he persisted, suggest Groopman and Hartzband, I would at some point need to stand aside and recognize the limits of persuasion and my comprehension of his motivations. It's a very hard thing to do. Which brings me to a last point: although Your Medical Mind was written for patients, doctors will find it worth reading, too - if only for the opportunity to get inside the heads of patients and find out what they were really thinking.
Posted by kennylin at 6:50 AM