Can't get a Supreme Court-side seat for next week's six hours of oral arguments on the constitutionality of the Affordable Care Act? Want to understand how the United States reached the point where the fate of a mostly yet-to-be-implemented 2010 federal law that extends health insurance coverage to nearly all of its citizens may rest on the Justices' interpretations of the Constitution's Commerce and Taxing and Spending clauses? You would do better to spend those six hours reading two essential books that shed a great deal of light on the legislative history and contemporary health policy issues that have shaped the current debate: Paul Starr's Remedy and Reaction and Douglas Kamerow's Dissecting American Health Care. 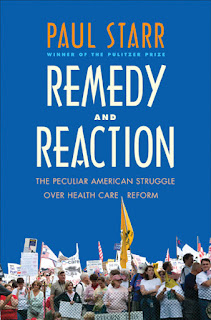 The authors of these two books have a wealth of experience as observers and participants in health reform efforts: Starr as a Princeton historian and sometime Democratic health policy advisor, and Kamerow as a former Assistant Surgeon General and Public Health Service officer. Both published in the last year, the books are complementary: while Starr's provides an overarching narrative history of health reform efforts from the 1920s through the present, Kamerow's is a collection of insightful short commentaries written for National Public Radio and BMJ starting in 2007. (Full disclosure: I have known and admired Doug Kamerow for several years in my capacity as a fellow adjunct faculty member in Georgetown University's Department of Family Medicine.) 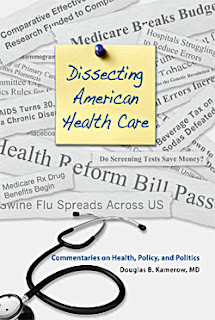 Below are quotations from two excellent reviews of each of the books:

From JAMA (Remedy and Reaction):

By removing the elderly and much of the working population from the uninsured, Medicare and the tax exclusion also removed much of the impetus for extending coverage to those still lacking it. The direct cost of Medicare and employer-provided coverage of beneficiaries is obvious, supporting the sense that beneficiaries' benefits are earned, while the heavy government subsidies involved are all but invisible. Extending similar benefits to others thus not only threatens a tax increase for those already covered but also can readily be understood or characterized as “welfare” and incompatible with US political ideals. The piecemeal approach to health insurance coverage did little to address problems in health care delivery, but it increased vested interests in maintaining the status quo.
Over time, reform proposals tended to leave more and more of the enormously complicated web of health care subsystems in place. One result is the great complexity of the Affordable Care Act, which provides yet another reason for objecting to it. None of the numerous other histories of US health care policy develops these themes in such an illuminating fashion.
- Samuel Y. Sessions, MD

Finally, there are quite a few essays throughout the book commenting or reflecting on recent developments in U.S. health care reform - made all the more interesting by the author's inclusion of essays in which his predictions about the course of health care reform turned out to be incorrect. ... This is a short, portable, and easily readable volume. All the essays are brief, so the book is perfectly suited for keeping on hand for those times when a few minutes are available to sneak in some reading. This book would also be suited to use in teaching on medicine and politics or medicine and society - the essays would provide interesting discussion starters for student or resident discussion groups.