Last month, I attended a talk by Jeremy N. Smith, whose book Epic Measures follows Dr. Christopher Murray's lifelong quest to improve measurement of global health problems, which culminated in the Global Burden of Disease study. Thanks to Tracy Kidder, whose 2003 bestseller Mountains Beyond Mountains made Murray's medical school and residency classmate Paul Farmer a minor celebrity, most people's idea of global health work is setting up clinics in impoverished countries such as Haiti and Rwanda. In contrast, after Epic Measures opens with a young Murray traveling with his family across the Sahara Desert, it mostly describes more prosaic activities: meetings with statisticians, navigating entrenched national and global health bureaucracies, and appealing to philanthropists for research support. What I loved about this book, I told Smith as he was signing my copy, is that it made sitting in an office cubicle performing complex statistical analyses seem almost as cool as practicing front-line medicine in remote areas of the world. 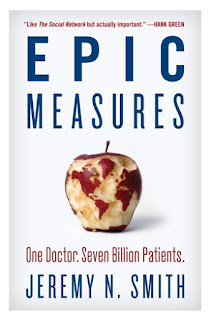 In his talk, Smith focused on three questions that drove Murray's research and the narrative arc of Epic Measures, beginning with: "What is the scientific evidence base for health policy?" Before Murray arrived on the scene, there was literally no one systematically measuring the overall global burden of death and disability. The World Health Organization was divided into mini-fiefdoms, each possessing its own set of disease-specific estimates and intent on defending its turf and budget share. Murray recognized the scope of this problem when he added up all of the disease-specific mortality estimates produced by various divisions of the WHO and found that the sum (30 million) was 10 million higher the United Nation's estimate of total child deaths in the same year! Non-governmental organizations were similarly haphazard in their approaches to global health problems, which received funding commensurate to the strength of political advocacy rather than an impartial assessment of their effects on specific populations. (Even today, as Murray's team recently illustrated in JAMA, the proportional match between relative disease burden and financial assistance to developing countries is imperfect, but at least the shortfalls are more transparent.)

Smith's second question: "Are we measuring the right thing?" Many chronic diseases cause enormous suffering, but may not result in death. Accounting for the amount of disability it causes over a lifetime to millions of adults, the burden of neck pain is twice as high as breast cancer in the U.S. This isn't to say that breast cancer is an unimportant health issue, but the countless walkathons, pink ribbons, and calls to raise money for breast cancer research and treatment far outpace the attention and dollars public and private sources devote to relieving neck pain.

Finally: "If we use new evidence and new measures, how far and how fast can we improve?" Quite dramatically, Epic Measures illustrated. Mexico prioritized coverage decisions for its national health insurance plan, Seguro Popular, on its national burden of disease data and saw its child mortality rate fall by almost half within a decade. Based on its burden of disease, Australia started paying for short-term depression therapy and dropped routine prostate cancer screening (a no-brainer in retrospect, given that screening has little to no effect on prostate cancer morbidity or mortality, but a hard call to make before 2011).

Smith's talk got me thinking along the same lines about the state of the health care workforce in the U.S., and how far we are from what is needed based on our national burden of disease. There isn't an easy fix when so much of our health care "system" is driven by disease-specific advocacy and perverse financial incentives to do more rather than less, and we spend more than $1 trillion each year on health professional salaries alone. But rather than simply projecting future workforce needs based on past experience or best guesses about evolving models of care in the post-ACA era, we should be asking some more basic questions. What is the scientific evidence base for U.S. health workforce policy? Are we measuring the right thing? And if we use new evidence and new measures, how far and how fast can we improve?
Posted by kennylin at 3:42 PM