On the morning of September 11, 2001, I was a family medicine intern making rounds at a teaching hospital in Pennsylvania. As I started writing a progress note on one of my patients, my senior resident emerged from the next room with tears streaming down her face. I couldn't imagine what had gone wrong. Had we just lost someone? Could I have possibly missed the distinctive overhead page for the Code Blue team?

It was worse than that - much worse. "It's horrible," she managed to say. "Absolutely horrible. I feel so bad for their families." I stepped into the room and saw both televisions airing live footage of the wreckage of the twin towers of the World Trade Center, where not one, but two commercial airliners had just crashed.

The rest of the day was a blur. It was nearly impossible to concentrate on the day-to-day routine of patient care when all I could think about were the thousands of lives claimed in the space of a few minutes. Later in the day I learned that a third plane had hit the Pentagon, and a fourth had crashed into a field about 150 miles west of my home. "This means war," one of my attendings stated flatly.

I had recently graduated from medical school in New York City, and after going home from the hospital, I tried calling former classmates who had chosen residency programs there. But the phone lines were jammed all night. It wasn't until the next day that I heard from a friend about how an army of physicians and medical students had mobilized at NYU's Bellevue Hospital, waiting for a massive influx of injured patients who never came. 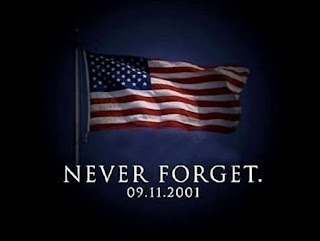 In the 15 years that have passed since that awful day, I completed my residency, got married to a wonderful woman, began my career as a family physician, and had four beautiful children who are, thankfully, still too young to fully comprehend what kinds of warped beliefs would possess people to deliberately fly airliners into buildings full of their fellow human beings. Eventually, I know I will have to explain to them the events of 9/11. And tell them, too, about the healing that time, faith, hope, and love can bring about after even the most grievous of wounds.

To all the victims of 9/11, living and dead, may peace be with you, today and evermore.

A slightly different version of this post first appeared on Common Sense Family Doctor on September 10, 2011.
Posted by kennylin at 3:12 PM