I only pay attention to college basketball during the first week of the NCAA tournament. Like many March Madness fans, I love rooting for underdogs. When the UMBC Retrievers became the first men's #16 seed to knock off overall #1 seed Virginia last week, I was in heaven. It broke my heart in 2016 when the upstart #14 seeded Stephen F. Austin Lumberjacks fell to Notre Dame in the second round on a last-second tip-in, a heartbeat from crashing the Sweet 16. In past tournaments, I was captivated by #11 seed George Mason's run to the Final Four in 2006 and #11 seed VCU's similar run from the First Four to the Final Four in 2011. 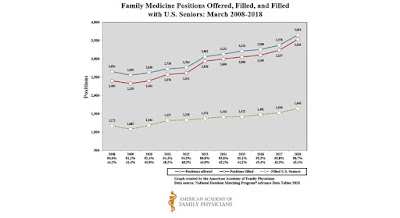 Family physicians are underdogs among medical specialties. If one were to rank student interest in the 24 specialties represented by the certifying boards of the American Board of Medical Specialties, the ROAD specialties (Radiology, Ophthalmology, Anesthesiology, Dermatology) would likely be #1 seeds, while Family Medicine, with its lower relative pay and more challenging work-life balance, would probably be seeded somewhere in the bottom half. Although the American Academy of Family Physicians cheered the results of last week's Residency Match, which saw another modest uptick in the number of U.S. medical students matching into Family Medicine residency programs, I have observed in a Medscape commentary that student interest in primary care is no "Match" for higher-income specialties. My own institution sent just 7 students out of a class of 200 into Family Medicine this year; nearly 3 times as many students matched into Orthopedic Surgery programs. It's no wonder that urgent cares, retail clinics, and telemedicine are thriving in the frontline health care void created by a growing shortage of primary care physicians.

What can medical educators do to increase student interest in primary care careers? Here's what I suggested in my commentary:

Early primary care exposure and required clerkships are necessary but not sufficient. ... Medical schools also need to "create a school culture that values primary care." That means advocating for excellence and innovation in primary care must be an explicit school goal, along with seizing every opportunity to discuss the foundational role of primary care in courses on health systems, and offering primary care tracks for selected students. Similarly, the Family Medicine for America's Health leadership team recommended creating longitudinal, integrated curricula in family medicine that allow students to make meaningful contributions to patient-centered care teams and have plenty of opportunities for faculty mentorship.

Embracing these strategies doesn't mean that family physicians won't continue to be viewed as the underdogs at tertiary academic medical centers where medical students receive the majority of their training, but it may give us more of a fighting chance to recruit students to our specialty before next year's medical version of March Madness.

This is an updated version of a post that originally appeared on Common Sense Family Doctor on March 23, 2016.
Posted by kennylin at 11:14 AM