Approval from the U.S. Food and Drug Administration to market a new drug is a critical waypoint along the path to profits for pharmaceutical manufacturers. Unfortunately, recent case studies have illustrated that FDA approval does not necessarily provide assurances of effectiveness and safety. In last month's Georgetown University Health Policy seminar, we discussed two examples, anemia drugs and the diabetes drug rosiglitazone (Avandia), which were prominently featured in recent articles by Peter Whoriskey in The Washington Post. 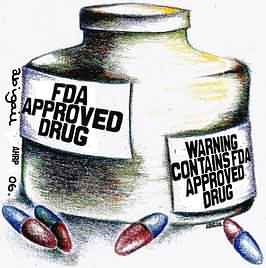 The original impetus for the development of the anemia drugs Epogen, Procrit, and Aranesp, which mimic the  actions of the hormone erythropoietin, was to spare dialysis patients with severe anemia the inconvenience and risks associated with periodic blood transfusions. However, noted Whoriskey, pharmaceutical companies moved aggressively to market these drugs to a far larger patient population who were much less likely to benefit from them:

The trouble would arise as the drugmakers won FDA approval for vastly expanded uses, pushing it in larger doses, for milder anemia and for patients with a wider array of illnesses. Very quickly, the market included nearly all dialysis patients, not just the roughly 16 percent who required blood transfusions. The size of average doses would more than triple. And over the next five years, the FDA would approve it to treat anemia in patients with cancer and AIDS, as well as those getting hip and knee surgery.

Doctors were motivated to give more doses of these drugs due to generous financial incentives (estimated at between $100,000 and $300,000 annually for a typical oncologist) and the seductive thinking that if some drug was good, more was better. Even the publication of a 1998 study in the New England Journal of Medicine showing no survival advantage to boosting hematocrit levels to normal ranges in cardiac patients did little to discourage overprescribing. Not until 14 years later did an independent researcher obtain access to the complete study report from the FDA and conclude that the NEJM authors had used statistical slight-of-hand to obscure an increased risk of heart attacks and death in the normal-hematocrit group. In the meantime, lobbyists working for the drug manufacturers successfully blocked efforts by Medicare administrators to stop paying for the higher (harmful) doses.

Similarly, the evidence that rosiglitazone (Avandia) increased the risk of heart attacks was slow to come to light, due in part to the drugmaker's research emphasis on the surrogate outcome of glycemic control. Although a 2007 meta-analysis first sounded the alarm about rosiglitazone's cardiovascular risks, the manufacturer successfully stalled regulatory action in the U.S. for three more years, during which thousands of new patients were prescribed the drug.

Could the FDA and other U.S. government agencies do more to protect patients from the effects of biased research and aggressive sales tactics for newly marketed drugs? What concrete steps could health policymakers take to encourage research to identify unexpected harms earlier in the drug approval process?